I went recently to Google Paris offices to attend an Angular meetup sponsorised by Firebase. Although I've already heard about Firebase in the past (mainly when they got acquired by Google) I've never tried it myself to see what it is capable of. Here is a quick experiment I did to play with it.

Firebase is a Database as a Service which lets you store and synchronize data in (near) real-time.

As it focuses mostly on frontend and mobile apps you will find an SDK for Android, iOS and JavaScript. But it also exposes a REST API so you can do basic CRUD operations from your backend.

The SDK allows you to establish a connection to their backend and receive notifications as soon as data is updated. By "real-time" they ensure you to receive those events in less than 200ms. They use WebSockets if available or fallback to long polling if not.

They also propose other features like offline capabilities (similar to what PouchDB offers) and delegated Authentication (via Google/Twitter/Facebook connect). I won't go much into details but invite you to read the docs or signup to try the quick tutorial for more details.

By using such technology you can develop an Uber-like application very easily, they said. I was eager to test it. Their admin dashboard is quite intuitive and the API is so simple that you can do powerful thing quickly.

My proof of concept is very basic but it may be useful in some situations.

It's an app you can use to easily locate your friends when you have an appointment but you don't have an accurate meeting point. You know they are close but you have difficulties in explaining where you are exactly (it could be a parallel street or just somewhere else in the park).

How the app works is very simple:

Now each time someone will go on that URL a new (anonymous) marker will be added and the map will be refreshed without you do anything. Blue point is your position while orange ones are others. 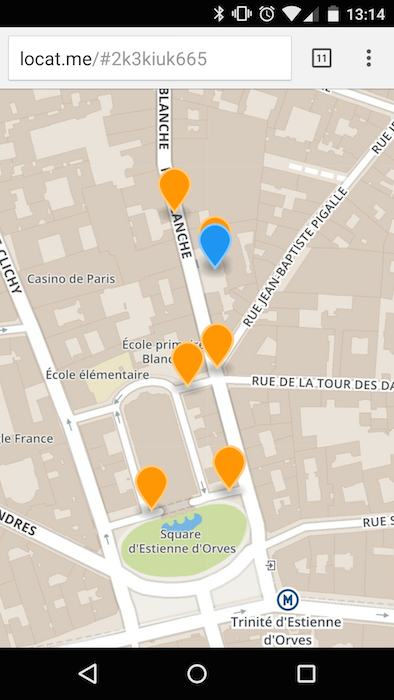 You can also use a custom identifier to share. Useful for named events (for instance locat.me/#my_meetup or even locat.me/#MattKetmo)

Note that since I'm using the free hacker plan of Firebase the maximum of connected users simultaneously is limited to 50.

About the domain name, this is a gift from Gandi which offered some free domains for their 15th birthday. As I won a .me I decided to use it for that occasion (unfortunatly every cool and short domain names were already taken so I needed to sacrifice the final "e" letter).

Now that I explained the main idea it's time to play with it. The code is really trivial. I think it took me less than an hour while watching a stupid movie on TV to get something working.

To display the map and the markers I used Mapbox. First time I played with it too. But my usage is very simple. This is what I just need to know:

Second thing I need to handle is the URL hash (ie. the map identifier). Here I just generate a new one unless it already exists.

This hash will help me to group markers together. I will use Firebase to read and write the geolocations under the /maps/{mapId} endpoint. 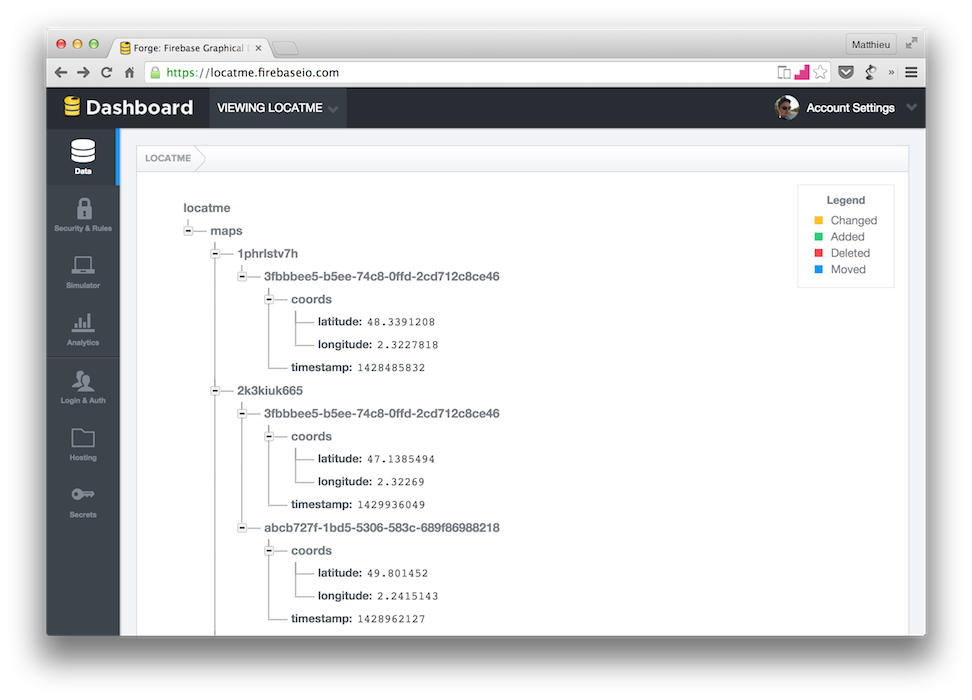 As you can see on this admin panel screenshot every marker is stored under the path /maps/{mapId}/{markerId}. It has a coord attribute with a latitude and a longitude as well as a timestamp to know its last update date.

I've also set the security rules to avoid people fetching every map ids. You can only read and write on path /maps/{mapId} but not directly on /maps.

The marker identifiers are unique per browser. I used a simple UUID generator function and save it in current LocalStorage. It allows user to refresh the page without creating another marker on the map.

Now the main action is to get user's current location and store it on Firebase. I'm using the HTML5 Geolocation API which provide a watch function to be notified of his positions.

Now the only thing left is to add markers on the map. To do this I listen on every events happening on the current map endpoint. In the example below addPoint(), putPoint() and removePoint() are simple functions to add, update or remove a marker in the map.

That's pretty much it. It was easy, right?

If you want to hack on it, checkout the code on github.com/MattKetmo/firemap. You can also find other demo applications of Firebase at firebase.github.io, like this real-time bus tracking in San Francisco.